Horizon controls a number of prospective tenements within the Kalgoorlie region in addition to Boorara, and all within trucking distance of the Boorara site. These additional projects include Binduli, Teal, Baden Powell, Windanya, Golden Ridge, Lakewood, Balagundi, Kanowna South and Black Flag. Together these projects fall under the Kalgoorlie Regional area. 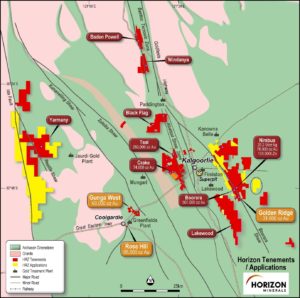 The 100% owned Binduli gold project area comprises approximately 98.8 km2 and is located 5 to 20 km west of Kalgoorlie-Boulder, immediately adjacent to the south and west of the Company’s Teal gold mine. It is also adjacent to the Frog’s Leg underground and White Foil open pit gold mines operated by Evolution Mining, and Norton Goldfields’ Janet Ivy mine.

Project geology at Binduli comprises Achaean felsic to intermediate volcanic and volcanoclastic rocks, porphyry intrusions and sediments within the hinge of the Goongarrie – Mt Pleasant Anticline. The area is bound to the west by the economically important Zuleika Shear Zone and to the west by the Abattoir Fault. The Zuleika Shear Zone and major faults and splays related to it are host to numerous significant gold deposits, a number of which are currently in production or development.

There are a number of priority targets within the project where historic drilling has intersected significant gold mineralisation including;

As a result of successful drill programmes in 2018 and 2019, a detailed independent Mineral Resource Estimate compliant with the JORC 2012 Code for Crake stands at:

The Binduli project is a high priority area for Horizon. Resource drilling at Crake will continue as a priority to inform the feasibility and to get the project development ready, together with high priority targets including Coote, Darter and Honeyeater. Most of these latter areas have had inadequate drilling and have considerable upside potential. 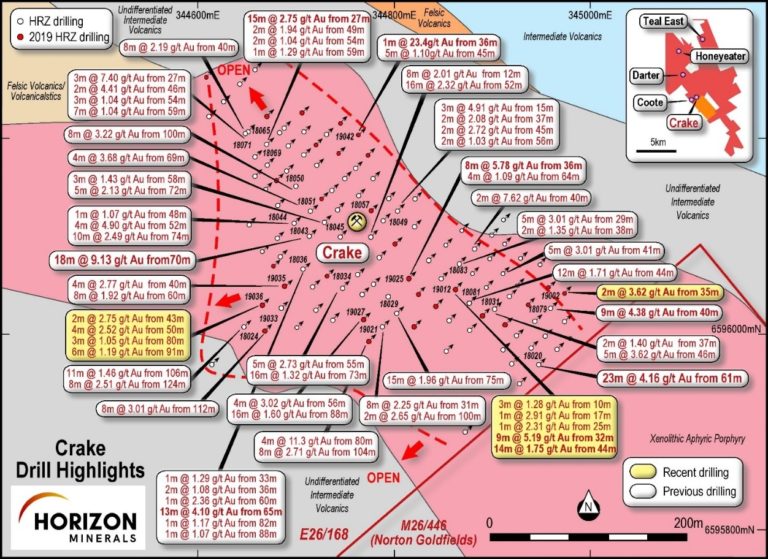 The geology at the Teal project area is dominated by Black Flag sediments (felsic volcanics and volcanoclastics) with lesser amounts of porphyry and intermediate volcanics. Fresh rock gold is typically associated with quartz and sulphides and faulting has displaced and pinched out some of the mineralisation. Primary mineralisation at depth exhibits semi-refractory properties and optimal recoveries are achieved through ultra-fine grinding, pressure oxidation or roasting. The shallow oxide supergene mineralisation is similar to the Teal gold mine where recoveries above 93% where achieved.

Open pit mining of Stage 1 commenced in late 2016 at the Teal deposit, and Stage 2 commencing in September 2017, with mining of both stages completed in March 2018 with final gold production occurring in the June 2018 quarter. The mine performed strongly against the feasibility study metrics with tonnes, grade, recovery and ounces up, resulting in a large increase in revenue.

Following a substantial amount of drilling, including a large 55,000 metres drilling program carried out in 2018, resources have continued to grow at Teal, Jacques Find and Peyes Farm.

The independent JORC (2012) Mineral Resource for the Teal Project, after depletion from mining Teal Stages 1 and 2, stands at:

The Teal and Peyes Farm prospects occur within a package of predominantly felsic volcanic rocks, 700 metres west of the Abattoir Shear ultramafic contact. Mineralisation at Peyes Farm outcrops and a series of shallow workings aligned in a north-south orientation occur over a strike length of 300 metres and targeted quartz-arsenopyrite veining.

Jacques Find was discovered by Horizon with deeper RC drilling beneath shallow low grade hits in late 2016 and lies 600 m south and strikes parallel to the Teal deposit. The stratigraphy at Jacques Find is dominated by a steep dipping, north to north northwest striking sequence of felsic tuffs, porphyries and intermediate volcanics.

Teal East, located 100 metres to the east of the Teal Open pit, and Teal West, located near the Teal ROM pad, were discovered in 2018.

Further stages of the Teal project shall focus on open pit development for extraction of the oxide and transitional ore as part of the mining production pipeline. In addition, metallurgical test work will continue to determine optimal processing pathways for the primary mineralisation with further discussions to be held with suitable processing plant owners in close proximity. 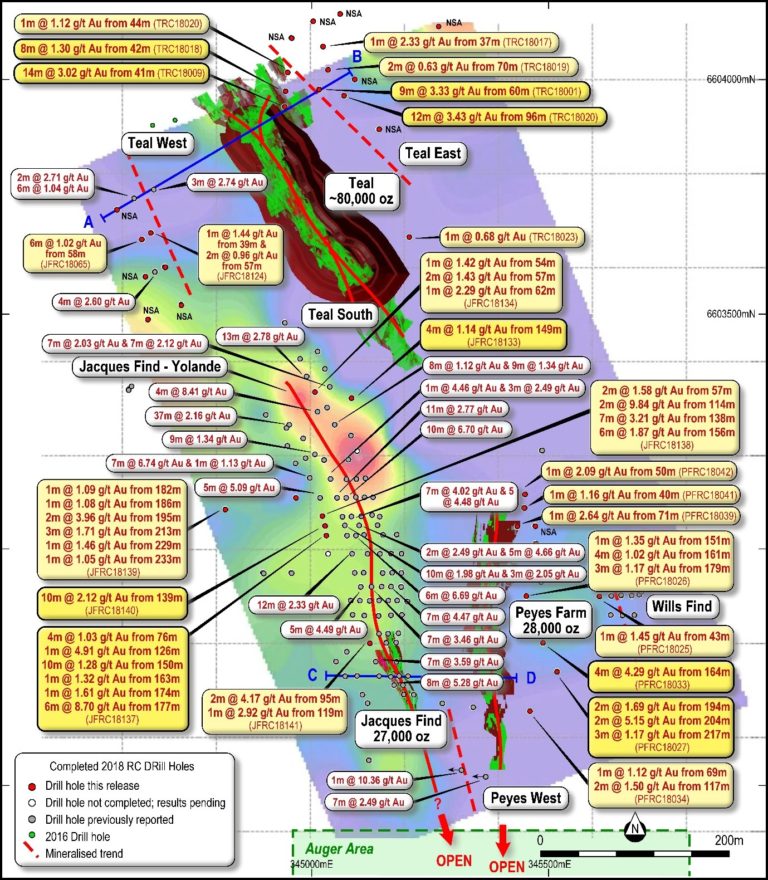 The Baden Powell and Windanya project area is located within the highly prospective Bardoc Tectonic Zone (“BTZ”), a major greenstone belt between Kalgoorlie and Menzies approximately 60 km north-west of Kalgoorlie.

RC drilling completed in 2017 at the Baden Powell prospect returned the highest grades from the project to date at that time. The drilling focussed on extensions at depth to the south of the historic shallow workings, with the best result being:

At the Olympia prospect, located 2.5 km northeast of the Baden Powell Pit, shallow aircore drilling in 2017 focussed on testing part of the 3,800 metres by 500 metres gold-in-soil auger anomaly (maximum assay 169 ppb Au) with anomalous levels of moderately oxidised quartz–sulphide related gold and supergene mineralisation intercepted at 50 to 70 metres vertical depth at grade up to 1.4 g/t Au.

Two holes for 329m were drilled into Olympia adjacent to OLAC1712 which discovered:

Further step out drilling is planned, with drilling at Olympia to focus on two key areas to test both the quartz sulphide mineralisation at depth and for the presence of a larger supergene blanket, similar to that seen at the 1.3 Moz Aphrodite deposit 4 km along strike to the north.

At Windanya, the Company completed a first pass 5 hole, RC program at the historic Capricorn Prospect in March and April 2019.  Earlier drilling had delineated gold bearing quartz veins on the contact of an ultramafic and basaltic unit.  Significant historical intercepts included:

The March drilling confirmed the tenor of mineralisation with results including:

In addition to the drilling, Horizon has also been actively exploring the entire Windanya tenement group having taken over 200 soil samples and rock chips in 2019. Several anomalies coincident with interpreted structures were generated and remain to be tested. These targets will be tested as part of the regional exploration program commencing in the second half of 2020. 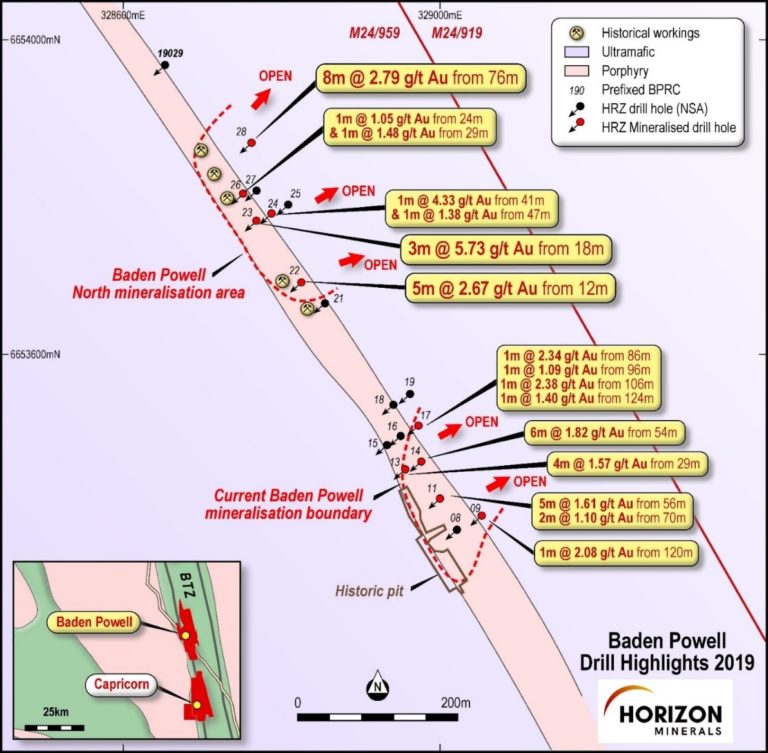 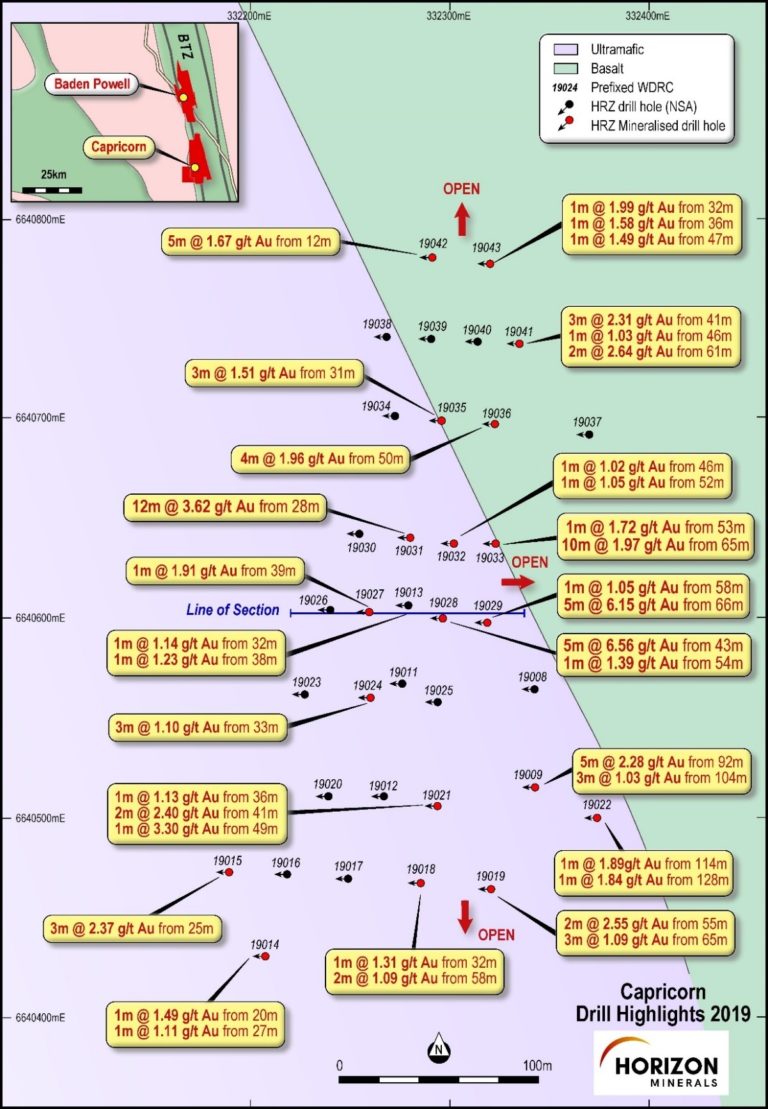 Lakewood is located adjacent to Boorara and only 8km southeast of Kalgoorlie’s super pit within the Black Flag Formation with influence from the Gidji and Boorara shears, the Golden Mile dolerite and the Boulder-Lefroy fault.

Many of the tenements at Lakewood have now been granted which allows Horizon to start conducting field exploration. Rock chip sampling, soil orientation surveys and field reconnaissance have commenced in these areas along with geochemical work showing some walk-up drilling targets.

The Balagundi-Kanowna South areas are also highly prospective for gold with the local geology dominated by a sedimentary sub-basin comprising shale, siltstone and greywackes that have been intruded by gabbroic sills and felsic porphyry dykes which provide additional exploration opportunities.  Data review, including recent seismic data has indicated some prospective targeting of future drill programs in the area.

The historic Golden Ridge Gold Mine was acquired as part of the asset swap with Northern Star Resources in 2019 is contiguous and to the south of Horizon’s Boorara project.  Gold is largely confined to a north-south trending, sub vertical felsic fragmental unit located between shales and cherts to the west and ultramafic sequences to the east.

Since mining at Golden Ridge was completed, there has been very little exploration work. Horizon will undertake a more detailed geological review of the Golden Ridge mining leases in preparation of planning for drilling.

The Black Flag project is located about 35km NNW of Kalgoorlie and overlies part of the highly prospective Abattoir Shear Zone (Teal-Jacques-Gimlet Deposits) and arguably, the south-eastern edge of Mt Pleasant anticline. The geology is dominated by the Black Flag volcanics, sediments and porphyry intrusives.

Much of the historical (drilling) work at Black Flag was completed by Centaur Mining (1996-1998) and Placer Dome (2003-2006). This work resulted in an improved geological understanding of the area which was mostly covered by sheet wash and lake clays. There are few, if any, historical drill holes of note, the best result being 1m @ 1.24 g/t (38m) and 1m @ 4.46 g/t (46m) from BFLA553 near the interpreted Abattoir Shear. 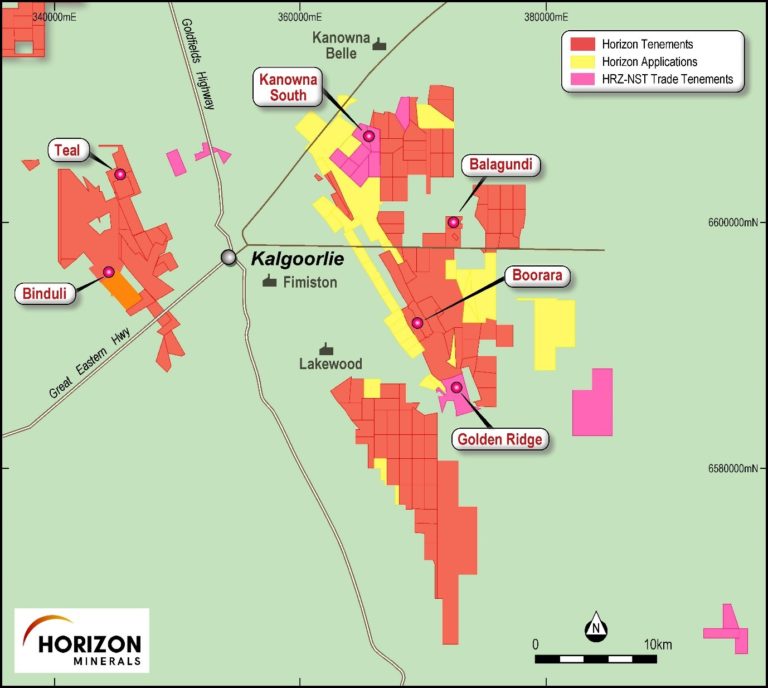